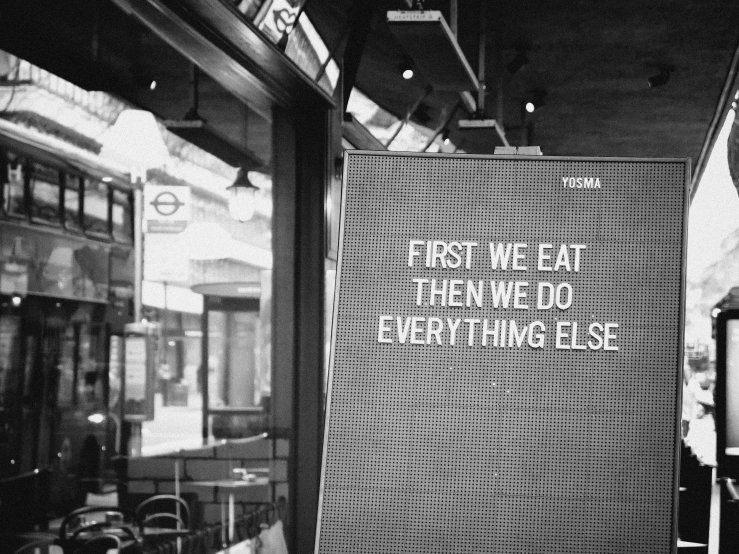 yesterday i ate a meal in public for this first time this year. a little under two months without eating in a restaurant or coffee shop or pub probably isn’t that big a deal in the grand scheme of things – i’m aware that plenty of people eat out far less than that and are perfectly happy with it – but it feels like a lifetime to me.

my eating disorder has taken, and is taking, so much away from me. the first and foremost is obviously starting ivf but, beyond that, it has insidiously seeped into every aspect of my day-to-day life, even if i don’t always realise it. one of the most sobering things that my psychiatrist said to me this week was actually something said in passing – that he’d have to swap rooms for my appointment with him next week because his usual room is right at the top of a tall victorian building just off harley street without a lift and he didn’t want me walking up that many stairs. someone telling me that i’m too ill to climb up four flights of stairs? that hit home like nothing else has. (even if i do think it’s a complete overreaction, not least as i live in a third floor flat and still always take the stairs.)

clearly, anorexia is also having a huge impact on my social life and all of my relationships. i’ve had to come up with an increasingly elaborate series of excuses as to why i can’t go somewhere or, if i do, why i have to leave early and/or not eat or drink. it’s exhausting. so much of what i use to enjoy resolved around eating and drinking with my husband or family or friends and that part of my life just feels so alien to me right now. eating solo is all well and good but very little can beat that magic of sharing a meal with people that i love.

and so, when my mother suggested that we meet up on saturday morning for a spot of shopping and some lunch, my initial reaction was to decline and cite some mythical prior commitment. but i need to start challenging myself and pushing myself and gaining weight otherwise everything else is pointless. so i booked a table at one of my favourite places to eat, studied the menu online for far longer than is normal and decided that i was going to fight for it. and i did.

i got there early and ordered a blood orange tea (i’m not really a tea drinker but i was bloody freezing). when my mum arrived, we ordered our food and i allowed the conversation to distract me enough to eat most of the delicious shakshuka that i ordered. and nothing bad happened. my parents don’t actually know about the anorexia diagnosis although clearly they can see that i’ve lost a lot of weight. my mother twice made reference to anorexia in different contexts (once in relation to a friend of hers, once in relation to bone density…we really know how to have interesting brunch conversations) and part of me wonders if she was trying to give me an opening to admit it to her. if she was, i didn’t take it. i don’t know if i’ll ever be ready to tell her.

what we did discuss openly though was our plans for ivf (i made a couple of excuses as to why we haven’t started yet) and she, very generously, said that she and my dad would like to contribute to the costs once we get there. this was so overwhelmingly kind of them and i don’t think i’ll ever be able to thank them enough for easing the financial burden of treatment. what it does mean though is that i really do need to get better. the only thing standing in the way of our dreams now is my anorexia and i can’t have that any longer.

{title quotation from in defense of food: an eater’s manifesto by michael pollan}

View all posts by eating brownies